Today we had a gentleman named Fred come in for a haircut and straight razor shave as a gift he received from his daughters for Father’s Day.  To say he was nervous is an understatement.  To begin with, he has being seeing the same woman for years for his haircuts and the only straight razor he has ever received was in East Van many, MANY years ago.

Him and Amar discussed his hair, what he normally does with it, what he likes and what he doesn’t, and of course what his lovely wife likes! 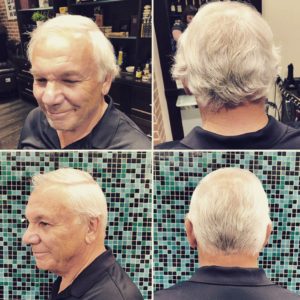 Amar worked with his hair and cut it into a super modern and fresh style, parting it on the side and leaving a little length on the sides.  You could see a small smile on Fred’s face.  Next came the shave.  Now, for first timers, this process can be a bit daunting.  Letting a stranger lay you back in a chair and then coming at you with a straight razor.  After a few minutes, Fred relaxed, closed his eyes and enjoyed as Amar worked his magic.

When he was all finished and checked himself out in the mirror, the smile on Fred’s face, and his two daughters, was undeniable!  They all said how much his wife is going to love it…she has her silver fox back!